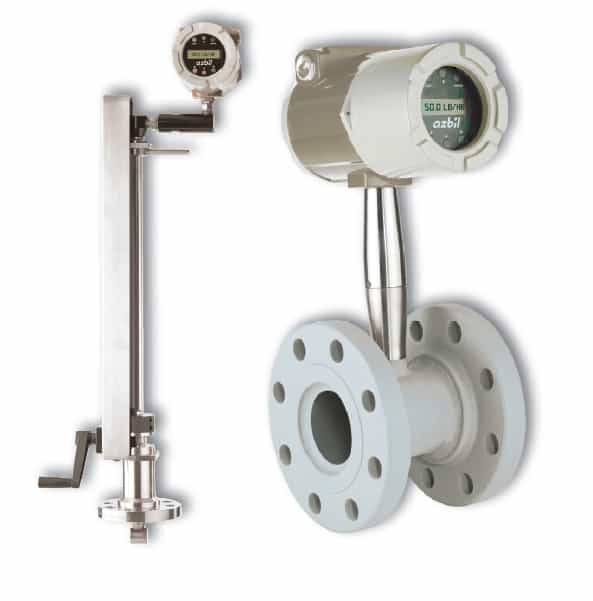 The AX Series of Vortex inline flowmeters measure flows of liquid, gas, and steam by measuring the rate at which vortices are alternately shed from a bluff body; this rate has been shown to be directly proportional to the flow velocity.

As flow passes a bluff body in the stream, vortices create pressure differentials which are measured by a piezoelectric crystal sensor, which converts these pulses into electrical signals. The meter uses an all-welded sensor design to create a strong unit and minimize potential leakage.

The AX Series can be configured to measure anything from simple volumetric flow of liquids and saturated steam up through multivariable measurements, including mass flow rate, pressure, temperature and density of liquids and steam.

Insertion style vortex meters measure fl ow by detecting the local velocity at a strategically located position within the pipe. Using local velocity, calculated by measuring the rate at which vortices are alternately shed from a bluff body within the sensor, the AX2300 uses parameters such as fluid type, pipe size, and Reynolds number to calculate accurate measurements.

The AX2300 offers flow computer functionality in a compact, hot-tappable field device. It can be configured to deliver up to three analog 4-20mA outputs of five process measurements, including volumetric flow rate, mass flow rate, pressure, temperature and density. With the Energy Monitoring option, the AX2200 and AX 2300 can also be configured to measure energy consumption within a process or plant.